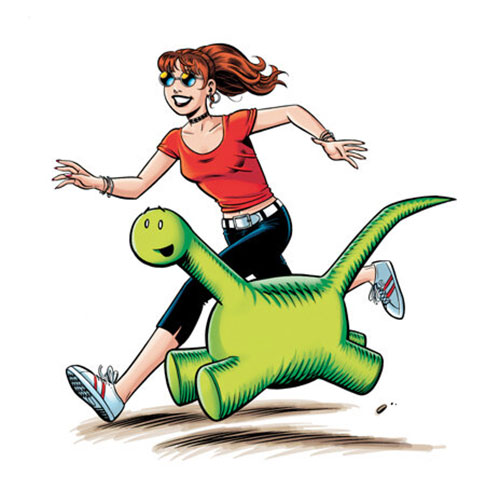 Andrew Pepoy has worked for U.S., Canadian, British, and French publishers on hundreds of comics on such characters and titles as The Simpsons, Fables, Batman, The X-Men, Iron Man, Star Wars, Wallace & Gromit, Scooby Doo, Betty & Veronica, Lanfeust, Uncle Scrooge, and many more over the last 30 years. In 2000, Andrew redesigned Little Orphan Annie and drew the newspaper strip for the next year, and in 2005 he brought his knack for retro glamour with a modern twist to writing and drawing a revival of the classic Archie Comics character, Katy Keene. Since 1990, he has written and drawn many stories of his own Harvey Award-nominated creation, The Adventures of Simone & Ajax, which has been collected in book form by IDW and appears as a webstrip at www.simoneandajax.com, with a new series in production. Nominated several times, Andrew won an Eisner Award in 2009 and has also won an Inkwell Award and been nominated for the Harvey and Hugo Awards. He lives in Chicago. His recent work includes drawing a Dinosaucers mini-series for Lion Forge, inking the 50th Anniversary graphic novel adaptation of the The Beatles’ Yellow Submarine for Titan, inking various Simpsons comics for Bongo Comics, art for MAD Magazine, a run as guest artist on the Dick Tracy newspaper comic strip, inking Die Kitty Die for Astrocomics, and drawing covers for Doctor Who, Archie vs. Predator II, Red Sonja, Lady Death, and other titles.