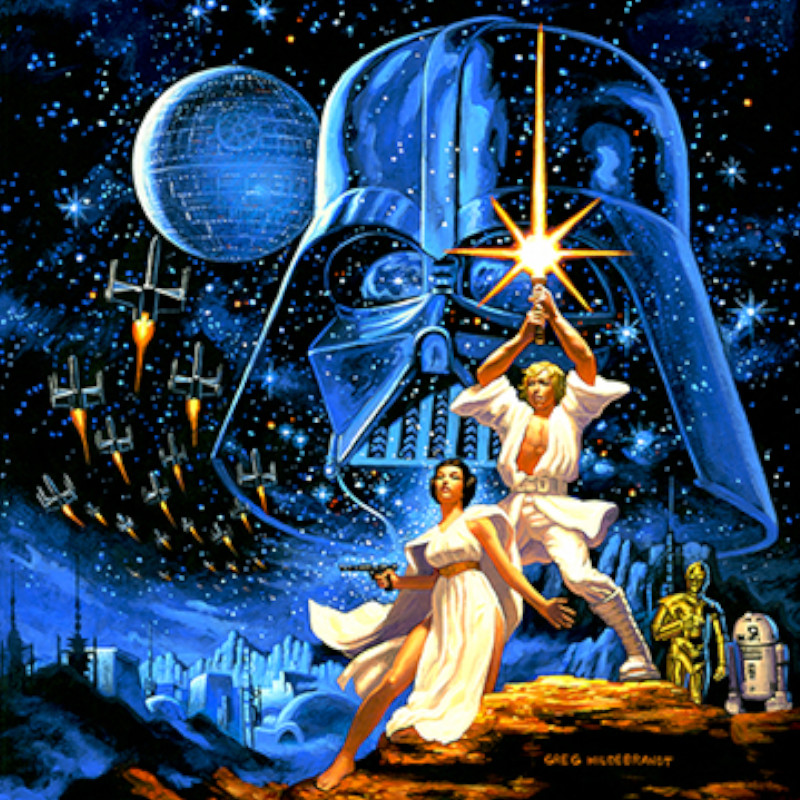 PAST BALTIMORE COMIC-CON GUEST
Greg Hildebrandt has unfortunately had to cancel their appearance at the upcoming Baltimore Comic-Con.

The sons of a Chevrolet division chief, Greg Hildebrandt and his identical twin brother, Tim, were born in Detroit, Michigan in 1939. Both boys were avid artists and creative thinkers from a young age and carried their artistic passion with them throughout their childhoods.

After attending the Meinzinger Art School at age 18, Greg and Tim worked for the Jam Handy Organization and Industrial Film Production Corporation. They worked on animated training films for the auto industry, the military and major US corporations. In 1963, they moved from Detroit to New York City to work for Arch Bishop Fulton J. Sheen. He hired them to create art for his weekly TV show, Life is Worth Living, and to produce films on world hunger.

Eventually their focus moved on to commercial illustration, and in 1975, Greg and Tim illustrated the first of a series of Lord of the Rings calendars for Ballantine Books. This series of paintings launched the two men into international fame, with over a million calendars sold, and the name The Brothers Hildebrandt® was born! In 1977, Lucas Films hired the Brothers Hildebrandt to create the movie poster for first Star Wars film, Star Wars: A New Hope. They only had 36 hours to create and paint the art. The movie was about to break in the theaters. They completed it on time. Lucas was very happy and another worldwide fandom was created.

In 1979 Greg began to work with a new agent, Jean Scrocco. She is still his agent to this day. One of the first licenses Jean wrote for Greg was with the Heavy Metal band, Black Sabbath. They wanted to use one of Greg’s dream paintings from the early 70’s for an album cover. Greg said, no. Jean licensed it anyway. The album was Mob Rules. Thank God for agents.

Finally, in 1999, at 60 years old Greg Hildebrandt decided it was time to paint for himself. Greg recalls, “I sat at my drawing board and began to sketch. I had no idea what I wanted to do. No clue what direction I wanted these paintings to go in. What I had was my love of art and an overwhelming appreciation of the beauty of women.

I knew one thing. I knew that I did not want my paintings to look like the great masters of pin-up art from the 40’s and 50’s: Gil Elvgren, George Petty, Haddon Sundblom and Alberto Vargas. I knew I wanted to set them in the 40’s and 50’s but they had to be mine. I didn’t want anyone looking at my art like I was copying these great artists. I want people to see my vision of pin-up art.

After weeks of drawing I finally realized that no matter how hard I tried, the sketches that I liked the best were full illustrations. Corner to corner so to speak – art that tells a story.”

Greg decided to pick a sub-genre to focus on for his paintings. His first piece would combine elements close to his heart – a beautiful woman, a jazz bar, and a handful of his friends. After finding the right model, Greg painted his first ever noir pin-up painting, ‘Emerald Evening’, and American Beauties was begun! Within weeks of finishing ‘Emerald Evening’ Greg landed a one-man show at the Meisel Gallery in Soho, New York.  After a few years there were enough paintings to feature the American Beauties on their own website, so Greg’s agent created a special online gallery just for these works of art, AmericanBeautiesArt.com. The American Beauties collection has unique subsets. There are good girls, bad girls, show-girls, girls with boats and planes, girls with guns and cars. Each of these paintings has a story to tell.

In 2015, Greg had the opportunity to return to Star Wars after 20 years for Marvel Comics. He painted three new pieces for them for Star Wars compendium covers. He also painted Deadpool, Old Man Logan, Secret Wars, Captain America vs. Hitler, Black Panther, Thor, Thanos, The Inhumans, and Conan comic covers for them. He is presently working on an Old Man Logan cover for Marvel.

In 2015, Greg started a new series titled, The Dark Side. In this series, he painted his favorite villains in extremely large paintings. Focusing mostly on giant head shots. The first three in the series are The Joker, Harley Quinn, and Batman.

In 2018, Greg began a new series titled “What If”. What if he wasn’t a kid in the 40’s and 50’s? What if he was an artist hired to paint the movie posters for the films he has loved since his first movie at age 5? So, he started with Creature from the Black Lagoon. The second painting he completed in this series is a painting for King Kong, 86 inches tall! This one is a killer piece of art. Then Greg decided to repaint the 1977 Star Wars poster. In 1977, he painted it in 36 hours with his brother Tim. This time, he painted it in 36 hours alone.

Recently, Greg was honored by the Air Force at Dover Air Force Base in Delaware. They requested a license to put one of Greg’s pinup paintings titled, “Keep em Flying”, on the nose of a transport plane. Greg, of course, said yes. This is a dream come true for him.