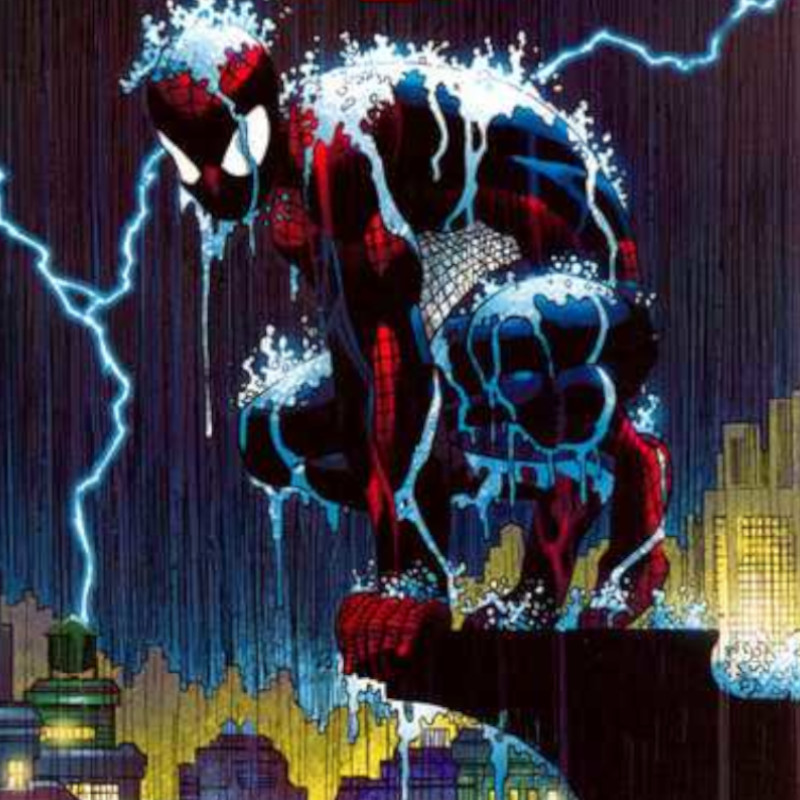 From 1983 to 1986 he had a run on the Uncanny X-Men with Dan Green and author Chris Claremont and co-created Forge. He would return for a second run on Uncanny X-Men in 1993. From 1988 to 1990, Romita had an extended stint on Daredevil, which included the creation of long-running Daredevil nemesis Typhoid Mary. He worked on a host of Marvel titles during the 1990s, including a return to Iron Man for the second “Armor Wars” story arc; The Punisher War Zone; the Cable miniseries; and the Punisher/Batman crossover. Romita collaborated with Frank Miller on a Daredevil origin story entitled Daredevil: The Man Without Fear in 1993, a revisiting of the character’s origin. Dan Jurgens and Romita Jr. relaunched the Thor series in July 1998, while a January 1999 reboot of Peter Parker: Spider-Man was handled by Howard Mackie and Romita Jr. In 2001, Romita returned to Spider-Man for a collaboration with writer J. Michael Straczynski beginning with The Amazing Spider-Man vol. 2 #30 (June 2001). He drew Marvel’s Wolverine with author Mark Millar. In 2004, Romita’s creator-owned project The Gray Area was published by Image Comics. He subsequently worked on the Marvel series Black Panther, The Sentry, and “Ultimate Vision”, a backup feature in the Ultimate Marvel line. In 2006, Romita collaborated with writer Neil Gaiman on a seven-issue miniseries reinterpretation of Jack Kirby’s characters the Eternals. Romita worked on the five-issue miniseries of Marvel’s 2007 crossover storyline, “World War Hulk”. In 2008, Romita again returned to The Amazing Spider-Man. He also collaborated once more with Millar for the creator-owned series, Kick-Ass, published by Marvel’s Icon imprint. This was later adapted into the 2010 film Kick-Ass, in which Romita, one of the producers, directed an animated flashback sequence.

On April 9, 2011, Romita was one of 62 comics creators who appeared at the IGN stage at the Kapow! convention in London to set two Guinness World Records: Fastest Production of a Comic Book and Most Contributors to a Comic Book. With Guinness officials on hand to monitor their progress, writer Mark Millar began work at 9 a.m. scripting a 20-page black-and-white comic book of his character Superior, with Romita and the other artists appearing on stage throughout the day to work on the pencils, inks, and lettering, each drawing a panel. The book was completed in 11 hours, 19 minutes, and 38 seconds, and was published through Icon on November 23, 2011, with all royalties being donated to Yorkhill Children’s Foundation. On May 4, 2012, Romita set out to break his own record for continuous cartooning, to support the charity Candlelighters Childhood Cancer Foundation of Nevada. He attempted to continuously sketch characters and sign comics for 50 hours straight.