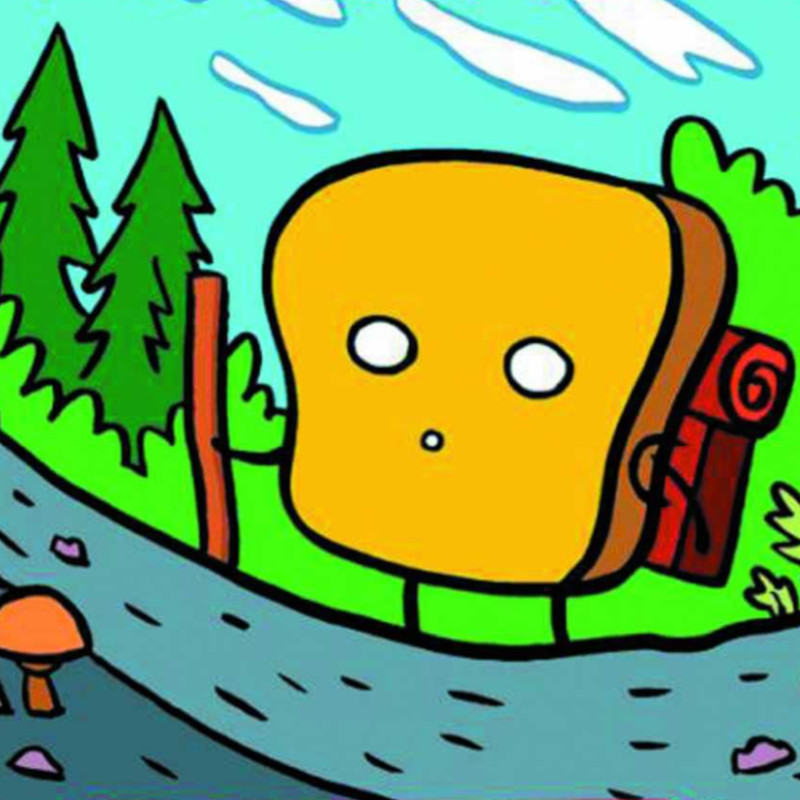 Adrian Todd Webb lives in Virginia, not far from the ocean. He likes monsters, the sunshine, and breathing air.

Since March of 2020, he’s drawn the daily comic strip The Poet about an un-named poet who frequents a favorite park bench, looks at the sky, and talks to a pigeon. The Poet is featured in three book collections so far, with more on the way in the coming year.

Over the past decade, he has illustrated the increasingly popular all-ages comic book series Mr. Toast Comics with writer/creator/brother-from-another-mother Dan Goodsell. Prior to that, he teamed up with rock star pal Robert Schneider of “The Apples in Stereo” to create Robbert Bobbert and the Bubble Machine – a children’s music project that spawned a CD, comic book, coloring book, and animated video on “Yo Gabba Gabba!”

He is the creator of the books The Goldfish and Bob, The Woodlands, and Tuesday Moon as well as the cartoon journal Casual Poet (pioneering the comic strip diary genre alongside James Kochalka’s American Elf and later the Journal Comic by Drew Weing), and was a regular contributor to Nickelodeon Magazine in it’s heyday.

His book Chance Operations has been featured in the Virginia Museum of Contemporary Art.

He illustrates the online comic strip The Adventures of Danny & Mike (a monthly recap of the exploits of Michael Maronna and Daniel Tamberelli – stars of cult 90’s tv show “The Adventures of Pete & Pete”) for theadventuresofdannyandmike.com and is knee-deep in the aptly titled long form comic strip Reading War & Peace which can be found serialized in his latest venture, the one-man-anthology series Long Pond Road.

Webb also performs music as Seamonster and OAHU and exhibits his signature ink and crayon pop culture artwork regularly at the renown Gallery1988 in Los Angeles and New York – and if you bump into him in real life he will draw a picture of YOU in CRAYON for ONE DOLLAR. It’s a well-known fact.

He is always drawing.


You’re at the drawing board but your teammate has got your back! Can you draw the art that is being drawn on your back without knowing what it is? The team with the best matching art advances to the next round. You do NOT want to miss the finale of this ridiculous contest.